Big News! I have a new release this week as part of the charity anthology Happily Ever Afters for Hope. My story features King Carlo and Queen Fabrizia of the Royal Scandals series, but also features their youngest son, Prince Bruno. Readers have been asking for more info on Bruno. This gives you a peek into his life. 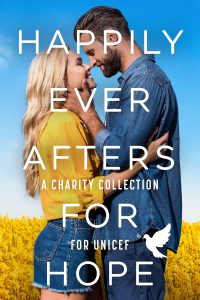 Happily Ever Afters for Hope

Here’s an excerpt of my story, Prince for a Weekend:

Fabrizia’s eyes narrowed slightly as she looked out the window.

“You’re watching me,” she said without turning around.

Carlo toed off his shoes and set them to the side of the bed. “Guilty. You do draw a man’s attention.”

“That’s not why you’re watching me.”

“Again, guilty. But what I said was the truth. You do draw a man’s attention.”

He crossed the room to stand behind her, then planted a gentle kiss on top of her head. He looked beyond the queen to the garden. Their daughter, Sophia, held a phone in one hand and the leash of a large Sarcaccian Shepherd in the other. Gaspare belonged to their son, Massimo, but Sophia frequently took her brother’s dog for walks when she needed to clear her head.

“She isn’t paying attention,” Fabrizia said, lifting her chin. “That dog will go in the fountain if Sophia doesn’t have a firm grip on him. You know how he loves the water.”

“He’s never gone in on her watch.”

The queen let out a harrumph. Carlo didn’t buy it. The queen loved Gaspare as much as everyone else in the family. Perhaps more.

He gave her shoulders a squeeze. “You miss when you could tell them all what to do. It gave you a purpose.”

She angled her head to meet his gaze. “They’re adults. My purpose was to get them to adulthood.”

Happily Ever Afters for Hope is a limited-time release, so grab your copy ASAP! The collection features stories from fifteen popular romance authors, with 100% of the proceeds going to UNICEF for their Ukranian relief programs. It’s a fabulous opportunity to support a good cause and have fun doing it.