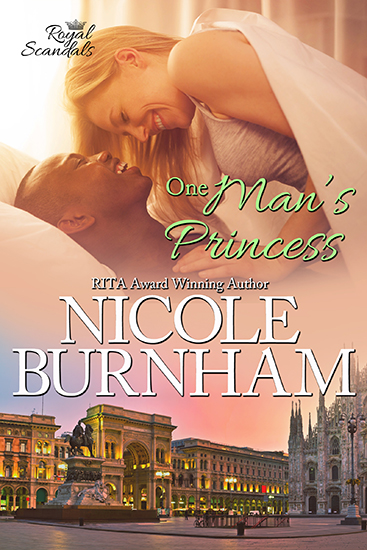 Book 6 in the Royal Scandals Series

The only person she can trust is the man who broke her heart.

Beautiful, talented lingerie designer Lina Cornaro sits on the cusp of major success. After her fiery affair with tough Formula One driver Ivo Zanardi ended in heartbreak, she’s learned to keep her focus on her career. Nothing could make her return to Ivo. Nothing, except the public revelation of her darkest secret: Lina is the illegitimate daughter of Sarcaccia’s King Carlo, one of the most famous men in the world.

When paparazzi trap Lina outside the most important meeting of her career, Ivo arrives to rescue her from the horde. She has no choice but to escape on his arm. But can she trust her career to the driven, charismatic man who once left her devastated? Or is he racing for a new prize—her love?

One Man’s Princess is available in ebook, paperback and audiobook:
Buy Now

One Man’s Princess is set in Manhattan, Milan, and Rome. Nicole kept a Pinterest board for inspiration, one that includes both pinned photos of the story’s setting and shots taken on her own trips to Italy. Visit her Pinterest board for the book here.

She was damned good at her job. However, she needed the three women and two men seated at the glass-topped conference table fifteen floors above New York’s Sixth Avenue to believe it as powerfully as she did. It’d become the most important thing in her life.