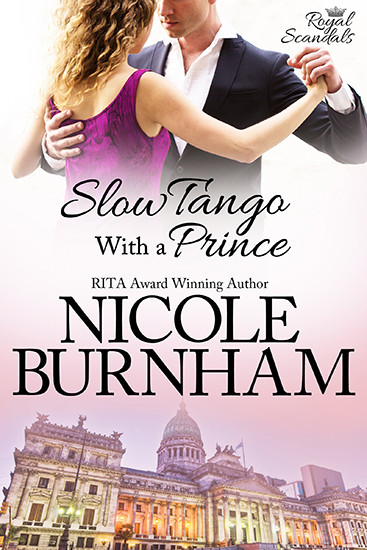 Slow Tango With a Prince

Book 3 in the Royal Scandals Series

Tormented by the suicide of his ex-girlfriend, Sarcaccia’s crown prince Vittorio Barrali escapes the glare of the cameras by secretly trading places with his twin brother and traveling to Argentina. There, he nurses his wounds in private, mentally preparing to resume the role to which he was born, a role that doesn’t allow emotion to take precedence over duty.

With her television show facing possible cancellation, At Home Abroad host Emily Sinclair learns the guest for her Buenos Aires season finale is a no-show. Fearing for her employees’ careers–not to mention her own–she’s elated when a chance meeting in a cafe provides the perfect replacement. But when the dark, handsome man resists her invitation despite the electricity sizzling between them, her curiosity is piqued. Then there’s the fact he looks so familiar…

Vittorio’s instinct is to help a woman in need, particularly one as enticing as Emily, whose work supports so many. But can he risk his own secrets coming to light?

Slow Tango With a Prince is available in ebook, paperback and audiobook:
Buy Now

Though Slow Tango With a Prince is the third full-length novel in the Royal Scandals series, it was the story that Nicole plotted first, and which gave her the idea of creating a series, rather than a single standalone romance. She wrote more than half the book before deciding that it was more appropriate to place it after stories about Prince Stefano and Prince Massimo, and set it aside to work on Prince Stefano’s book, Scandal With a Prince.

For more on Nicole’s inspiration for Slow Tango With a Prince and a few of the nonfiction works she read while writing the story, check out her Pinterest board for the book.

Victor stood less than three feet in front of Emily, his marked-up newspaper rolled in his hand. Despite the fact he wore the same loafers, dark jeans and white Oxford-cloth shirt as this morning, no one could doubt he belonged in an apartment as luxe as this one. He carried himself as if he already owned the place.

Taller, broader in the shoulder and narrower in the hip than she remembered from their brief encounter, when a table had served as a buffer between them, he dominated the space between the island and kitchen’s the rear wall of cabinets. He’d sent her heart into a slow flip this morning, but being this close to him fired every nerve in her body.