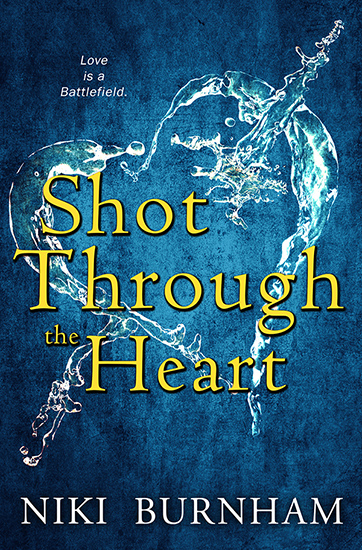 Shot Through The Heart

Senior year? It’s all about Senior Assassin, a yearly water gun tournament where the last team standing wins a cool two grand. Connor wants nothing more than to split that prize with his best friend, Josh.

When the guys’ mission is put in jeopardy by Molly—thanks to her crush on Connor—Josh concocts a plan to thwart her, one that involves his academically-inclined sister, Peyton…but as Peyton is forced to choose between chemistry class and chemistry with Connor, who wins and who loses?

One thing’s for certain: When Connor, Peyton, Josh, and Molly load their weapons, someone’s bound to get shot through the heart.

The idea for a water gun tournament didn’t originate with Niki (much as she’d like to claim credit). Unofficial games similar to Senior Assassin take place at various high schools and colleges. Water guns, NERF guns, or even stickers are used to eliminate players. For more info, check out the Wikipedia page on the subject.

“Two thousand bucks on the line and you’re using your limited brain power to answer sappy texts from a girl?” Josh Lindor eyes my cell phone screen in disgust. “Geez, Connor. From the pathetic look on your face, I thought you received the name of our target. Senior Assassin e-mails are supposed to go out at five o’clock.”

I pluck my phone from his crumb-encrusted fingers and drop it into the grass next to my soda, behind the basketball hoop at the side of the Lindors’ driveway. I glare at him, daring him to steal it again. “I wasn’t answering the text, I was reading it. There a law against that?”