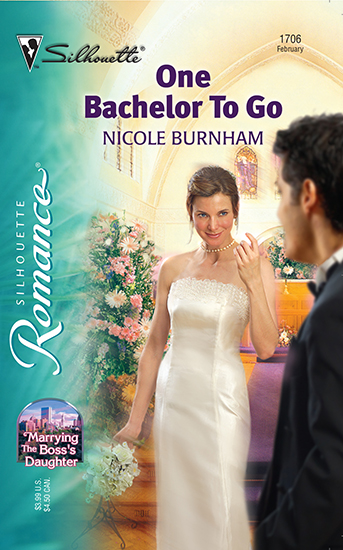 One Bachelor To Go

Emily Winters wants nothing to do with marriage. After her failed marriage to Todd Baxter, the wanna-be golden boy at her father’s company—the same guy who’d stolen company secrets and sold them to the competition—she’s through with romance. Especially to anyone having anything to do with Wintersoft. Unfortunately, her father has other ideas, and she’s been forced to find girlfriends (or wives!) for the single executives at the company, since her father can’t see to get a clue.

When there’s only one bachelor left, Emily figures she’s safe. After all, Jack Devon, who’s been named one of Boston Magazine’s Hottest Bachelors, goes for a very different kind of woman. Until Jack and Emily are sent to Reno on a business trip, and discover that love is sometimes worth a gamble….

Silhouette Books invited Nicole to write the sixth—and final—book in their Marrying the Boss’s Daughter continuity series (connected books written by different authors.) The series is set in Boston—very close to Nicole’s home—and the heroine lives and works very close to Nicole’s husband’s office. It was a blast for Nicole to write about a familiar locale. Half of Nicole’s book is set in Reno, so that also gave her the opportunity to explore Lake Tahoe, drive around Reno, and then do a little gambling of her own—all in the name of research, of course.

About the Marrying the Boss’s Daughter continuity series:
Here’s the premise: Lloyd Winters, the CEO of Wintersoft, Inc., is desperate for his recently-divorced daughter Emily to marry someone at the company. Knowing he won’t listen to her protests, because he truly believes this is best for Emily, Emily conspires with Lloyd’s secretary, Carmella, to find girlfriends and/or wives for the six unmarried vice presidents at the company.

The series ran from September 2003 through February 2004. A different author penned each of the connected books, and one was released each month. Nicole’s book, One Bachelor to Go, is the culmination of the series. You don’t need to read all the books—each one stands alone—but Nicole’s characters make appearances in each of the other books, since the heroine of Nicole’s book is none other than Emily Winters.

The six books in the series are:

“Emily! Join me in the ladies’ room?”

Emily Winters frowned over her Monday morning coffee and stopped short beside the desk of Carmella Lopez, her father’s longtime administrative assistant. Without checking her watch, Emily knew fourteen Wintersoft employees were taking their seats in the conference room down the hall, putting away their Palm Pilots and turning off their cell phones, ready to start her department’s weekly sales strategy meeting.

“Do not miss this book!” Five stars!”
–CataRomance
“… an entertaining and delightful read that is the best of the series.” Four stars!”
–RomanticTimes Bookclub Magazine
“What a perfect ending to Marrying the Boss’s Daughter series. This story is filled with sexual tension and uncertainty.”
–The Old Book Barn Gazette