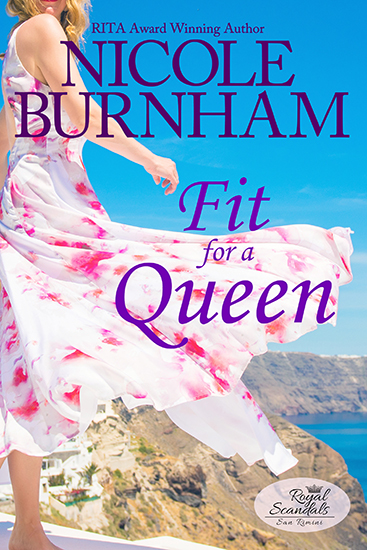 Fit for a Queen

She holds the secrets of a queen. He’s been hired to watch her.

Daniela D’Ambrosio is the most trusted employee of Sarcaccia’s Queen Fabrizia, managing the queen’s schedule and ensuring she never makes a misstep in public. But when Fabrizia sends Daniela to organize the belongings of San Rimini’s late queen for a charity auction, Daniela finds a locked closet full of treasure, a suspicious king, and an attractive handyman who seems strangely familiar.

Following a harrowing stint in the military, Royce Dekker now runs his own security firm in San Rimini. When he goes undercover to safeguard the late queen’s possessions, Royce learns that the woman organizing the auction project is none other than Daniela D’Ambrosio, the stunning beauty who’s fueled his late-night fantasies ever since their stolen night under the stars.

When Daniela recognizes Royce, she realizes there is more to the palace job than she was told. But can she trust the sexy man standing guard over her as she works? Or will Royce discover that Daniela also has secrets to uncover?

Fit for a Queen is available in ebook, print, and audio:
Buy Now

For years, the collection of clothing and jewelry owned by Princess Diana has been used to fundraise for charitable causes she supported during her lifetime. Some items have been sold at auction, while others have toured the world as part of special exhibits. After Queen Aletta of San Rimini passes away, her husband, King Eduardo, wants to see good come from her belongings. Due to security itssues, he’s hesitant to allow anyone into the late queen’s closet. His good friend, Queen Fabrizia of Sarcaccia (who features in the Royal Scandals series), sends her most trusted employee, Daniela D’Ambrosio, to San Rimini to handle the task of organizing Aletta’s belongings.

The auction and the charitable exhibition in Fit for a Queen were modeled after those created in honor of Princess Diana. The Sydney Morning Herald ran a story in 2017 highlighting the range of outfits that eventually became part of these fundraisers and the history behind them.

Daniela closed her eyes for a moment, imagining how she’d have designed the bar if she’d owned it. The place made its money on volume, which explained the management’s desire to draw in a capacity-busting number of patrons. Daniela’s dream location would have all the dancing, all the excitement, but with half the crowd so people had room to move, to enjoy their food and drinks without spilling, and to hear each other talk. She’d lengthen the bar and round it on the ends so the bartenders would be able to work within the same amount of space, but with better flow for guests as they approached, purchased their drinks, then returned to the dance floor or one of the high-topped tables that ran along the perimeter.