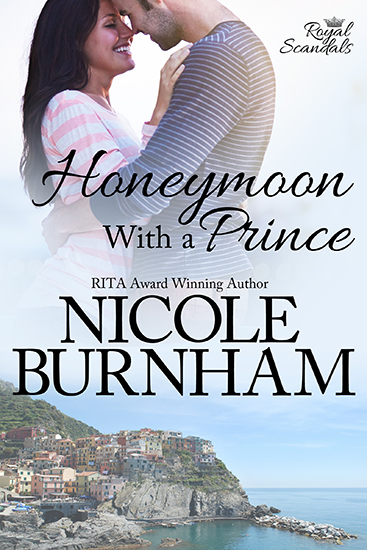 Honeymoon With a Prince

Book 2 in the Royal Scandals Series

After dumping her rich liar of a fiancé, designer Kelly Chase opts to take her honeymoon solo. What better chance to nurse her wounds than two weeks of beachfront bliss on the breathtaking Mediterranean island of Sarcaccia? Yet when she meets gorgeous local beach bum Massimo—thanks to his runaway dog—solitude becomes less important than enjoying the company of an honest man, one who values people over position and wealth.

Fresh from brutal combat, seeking privacy and a chance to heal, Prince Massimo Barrali is intrigued by the gorgeous American who fails to recognize him. He offers her dinner, but dinner and deep conversation become a night of intense passion…until the police knock on the door of Kelly’s rented villa and he’s forced to reveal his identity.

Kelly hates that she’s been deceived again. But who is the true Massimo Barrali? The wealthy, worldly prince? Or the thoughtful military man with whom she shared a romantic night under the stars?

Honeymoon With a Prince is available in ebook, paperback and audiobook:
Buy Now

Though the island nation of Sarcaccia, where the Royal Scandals series is set, is an idyllic spot for vacationers, Nicole wondered how a person who’d spent time in one of the world’s most dangerous areas would view it. Having watched extensive news coverage of the warlords and guerrilla groups like Boko Haram who terrorize the citizens of the Nigeria and its neighbors, Nicole wanted to have Prince Massimo spend time in that area, then move back into life in the spotlight in Sarcaccia. No one, even a prince with unlimited financial resources, can walk away from such horrors unscathed, which made Massimo an intriguing character to write…and the perfect person to challenge Kelly Chase, who is suspicious of wealthy, spoiled men with good reason.

For more on Nicole’s inspiration for Honeymoon With a Prince, you can visit her Pinterest board for the book.

Kelly Chase woke with a start, nearly knocking over her daiquiri as she flung her hand to the right, in the direction from which she could’ve sworn she’d heard the low whunk of design books slamming into the floor.

She blinked when the sounds of rolling surf and distant laughter reminded her she was nowhere near the office. While her heartbeat slowed to its normal rhythm, she cursed herself for trying to ruin a perfectly good honeymoon by dreaming about work.