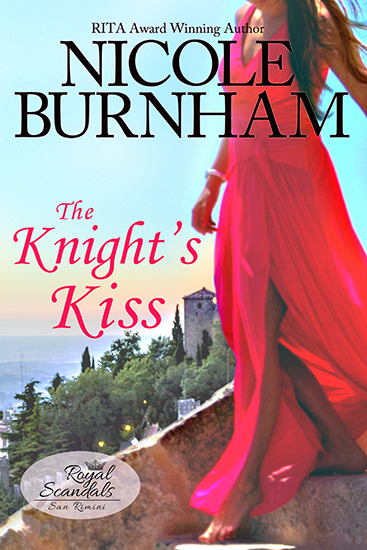 He lived in Once Upon a Time.

When Princess Isabella diTalora needs an expert to study the ancient artifacts hidden beneath the royal palace, she’s determined to hire the best: Nick Black, a mysterious collector who knows San Rimini’s medieval era better than anyone.

Nick Black knows San Rimini’s history for good reason. He lived it. In fact, he was once known as Domenico of Bollazio, a powerful knight pledged to San Rimini’s king. But he was cursed for his ambition and will never know peace—or mortality—until he can solve the riddle of his enchantment.

Nick knows modern technology will soon reveal his immortality to the world, so—despite the risk—he accepts the assignment from the princess in hopes of breaking his curse. But as he spends more time with the beautiful princess, he learns that some risks come with unexpected consequences.

The Knight’s Kiss is available in ebook, print, and audio:
Buy Now

There’s a scene in The Knight’s Kiss where Princess Isabella and Nick Black find a medieval book in the storage area beneath San Rimini’s palace. The book has a metal loop attached to it. In medieval times books were extremely valuable, so they were frequently attached to shelves or desks with locks and chains to prevent theft. If you’d like to learn more about medieval libraries and see examples of chained books, visit the website for the Hereford Cathedral Chained Library, which is the largest surviving chained library in the world.

If you watched Game of Thrones, a similar library is shown in Season 7, when Samwell Tarly studies at the Citadel. The books at the Citadel are chained, even in areas outside the restricted section. Books are not circulated to the public and are exclusively for the use of scholars and a privileged few.

With any luck, the beauty perched on the brass and leather chair in his lobby just might lead him to Rufina.

Nick Black studied the image on the closed-circuit television behind his desk, watching as San Rimini’s Princess Isabella diTalora discreetly checked her Rolex. She kept her back straight and a smile on her face, but he suspected even modern royalty didn’t appreciate being kept waiting.

Nick grinned inwardly. Her forebear, King Bernardo, wouldn’t have exhibited such patience. The whine of an ambulance siren echoed up to him, thirty-five floors above Boston’s financial district, then faded.