She was damned good at her job. However, she needed the three women and two men seated at the glass-topped conference table fifteen floors above New York’s Sixth Avenue to believe it as powerfully as she did. It’d become the most important thing in her life.

Lina circled the table and clicked to a screen that pictured Isola’s new table display. She kept her tone engaging. “We’ve all seen exclusive boutiques where only associates handle the merchandise or visited high-end stores where shoppers feel they’re under a microscope if they dare run their fingertips over a garment or read a price tag. At Isola, we take the opposite approach. Our displays invite shoppers not only to look, but to touch.”

She plucked a pair of lace panties with high-cut leg openings from the table, then gave the rich aquamarine fabric at the waistband a light tug to show its resiliency. The Mirabeau store managers leaned forward, which brought her a swell of reassurance. From the moment she’d started speaking, Lina suspected more than one listened to the cadence of her voice rather than the content of her presentation. Examined her gestures as she moved around the room. Discreetly studied her features. Attempted to determine what she had and hadn’t inherited from her biological father, as if it were proof of…something.

Then again, maybe none of them followed the European tabloids and her concerns were unfounded.

“When a woman feels the stretch of our lace panties, she’ll realize they’re strong enough to hold up to her daily activities, yet will lie softly against her skin without rolling or pinching. A man whose thumb glides over the lace of a bra cup crafted in our Italian factory will recognize the artistry of it. He’ll know it’s worthy of the woman whose body it graces.”

That drew smiles from the group, though not as many as when Lina made a similar presentation to a London retailer in January, shortly before her life was upended…first privately, and then publicly.

“Our work is beautiful to behold, but it’s the tactile experience that proves Isola is the perfect marriage of aesthetics and engineering, and that it’s excellent quality for the price. During next week’s launch event, the sales team at each of your stores should encourage shoppers to hold our lingerie. Allow them to experience Isola’s trifecta of style, comfort, and durability. To understand that while it appears delicate, it’s exceptionally strong. They’ll pull these pieces from their lingerie drawers day after day, knowing they can wear them with confidence in any situation. It’s what differentiates Isola from the competition and will make it a rousing success at your stores.”

She clicked to the final screen, closing her presentation by emphasizing the upward sales trend at her shop in Milan and early sales figures from the London retailer before taking questions.

Ten minutes later, having left the store managers with gift bags, Lina took the elevator to the ground floor. Alone at last, she allowed her smile to slip. The Mirabeau staff had been gracious, professional, and enthusiastic. No one mentioned the fact that, following her mother’s death, Lina had been publicly outed as the illegitimate daughter of Sarcaccia’s very popular—and very married—King Carlo. None of the administrative assistants or other staff gave her awkward looks or whispered as she’d walked by their desks.

She rolled her shoulders, suddenly aware of how much stress she’d carried in anticipation of today’s meeting.

Ever since the king’s press conference six weeks ago, when the monarch broadcast their relationship to the world, Lina had kept her head down and worked, determined to stay of the public eye and let the royal family handle questions about the king’s scandalous affair. She’d kept her business humming, using her extensive To Do lists as a shield against the grief of losing her mother to a long, painful battle with liver disease. So far, that tactic had worked, at least as far as the public’s interest in her was concerned.

The elevator slowed to a stop. Lina straightened and resumed her professional demeanor. She’d take today as a sign to get over her paranoia. New celebrity scandals occurred daily. The world would eventually forget—or it simply wouldn’t care—that while he was a teenager, a famous king had an improper relationship with his private tutor and that he’d continued that relationship through the early months of marriage to his equally famous wife, and that Lina and her siblings were the result. If she kept on her current path, Lina would be defined by her professional accomplishments and her kindness toward others, rather than by a man she’d never met. Or, worse, by the nature of her mother’s long-ago relationship with that man.

And if she truly believed that, there was a bridge not far from her current location any New Yorker would be happy to sell to her. 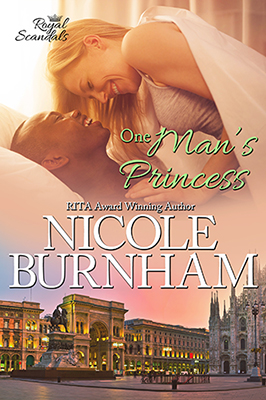