One Bachelor To Go

“Emily! Join me in the ladies’ room?”

Emily Winters frowned over her Monday morning coffee and stopped short beside the desk of Carmella Lopez, her father’s longtime administrative assistant. Without checking her watch, Emily knew fourteen Wintersoft employees were taking their seats in the conference room down the hall, putting away their Palm Pilots and turning off their cell phones, ready to start her department’s weekly sales strategy meeting.

“I only have a minute, Carmella.” And Carmella, the one woman in the company who knew all the gossip—and everyone’s secrets—rarely took a minute.

Emily glanced past Carmella to where her father, Lloyd Winters, the CEO of Wintersoft, sat at his desk. From the sound of his voice, Emily guessed he was battling the same problem he’d faced all week. Emily dropped her voice so only Carmella could hear. “I take it this doesn’t regard our distributor trouble?”

A look from Carmella told her all she needed to know. She’d rather it concerned the distributor.

“I thought we decided not to pursue this plan any longer?” Emily shot another quick look at her father to make sure his attention remained on his phone call, then focused on Carmella. “I know how badly he wants me to marry someone here at the company. Enough that he’s willing to go behind my back to pester my own colleagues into asking me out on dates. But now that we’ve managed to set up all the eligible men—”

“Except Jack Devon. I know.” Emily resisted the urge to roll her eyes. Just mention of the man’s name, let alone seeing him in the flesh each day at work, put her on the defensive, both professionally and emotionally. She and Carmella couldn’t possibly find a match for him. Not only was he a league above everyone else in the company, having been named as one of Boston’s Fifty Hottest Bachelors by Boston Magazine, he kept his privacy fiercely guarded.

But since Jack would never ask her out—pressure from Lloyd Winters or not—she didn’t have to worry about him. Just last month, she’d overheard Jack talking to her father about a dinner party Lloyd had thrown the night before. He had the audacity to refer to her—to her own father!—as a “spoiled rich girl.” Her father had laughed, rather than defending her to Jack, making it all the more evident how desperate he was to find her a husband. She wasn’t about to risk her professional reputation trying to play matchmaker for Jack to prevent the off-chance Lloyd could convince him to ask out his spoiled rich girl daughter.

“That’s who we need to discuss, and before your meeting,” Carmella whispered, then more loudly added, “Could you help me with something, Emily?”

One of the company’s vice presidents, Brett Hamilton, chose that very moment to pass near Carmella’s desk on his way to grab a cup of coffee. “You need help, Carmella?”

“Emily’s got it,” she smiled. Brett continued on his way, and Carmella grinned at Emily.

Emily shook her head, then threw a pointed glance toward the conference room to remind Carmella of her meeting. The older woman hurried ahead of Emily, down the wide hallway between offices and past the desks of the myriad administrative assistants, then ducked into the women’s room. After ensuring the stalls were empty, Carmella took a deep breath. “I know you were never comfortable with our plan to find girlfriends—or as it worked out, brides—for any of Wintersoft’s bachelors, let alone for Jack Devon—”

“It’s not my style to barge into anyone’s personal life.” Not only was it rude, she had other items on her to-do list. Like attending the sales meeting.

“Of course not. But we both know why it had to be done.” Carmella jerked a thumb in the general direction of Lloyd’s office. “If we didn’t do it, it would have been done for us. And you wouldn’t have liked the results. I saw what happened the last time your father pressured you into dating someone from the company.” Carmella’s eyes held a tinge of sadness. “Todd Baxter did a number on you—and not just on your career.”

“Okay, so we didn’t have a choice,” Emily admitted. As much as she despised using personal information—gleaned from the company’s personnel files, thanks to Carmella—about her co-workers to find them potential girlfriends before Lloyd pushed them into asking her out, she cared about protecting her heart and her reputation more. Not to mention her father’s reputation.

Lloyd Winters was a well-respected man and dedicated to his company, but both Emily and Carmella knew he had a huge blind spot where his daughter was concerned. One that, in the past, caused him to act against his own professional interests if he thought it would make Emily happy.
Or laugh when someone referred to his daughter as spoiled.

But in this case, finding Emily a husband—one who worked for Wintersoft and loved the company as much as she did—wasn’t what would make her happy. Try as she might, Emily couldn’t convince her father of that, even after the Todd Baxter disaster.

“I’ll admit, our matchmaking plan worked out for the best for everyone. Five couples are living their happily ever afters, thanks to us.” Emily leaned toward the door, making sure no one approached. “But our role in those relationships is over and done with, so I don’t think we should be talking about it anymore. If anyone finds out what we did—”

“That’s why I dragged you in here. I think Jack Devon has found out.”

Emily set her cup down on the restroom’s green and black granite countertop hard enough to splash coffee over the edge. Anyone but Jack! “He has? How? I mean, he’s given me some strange looks, and we know he suspects someone’s gone through the personnel files, but he can’t possibly know for certain—”

“Your father wants you to meet him in his office this morning at nine. He was adamant that you finish up the marketing meeting in time.” Carmella’s eyes widened in panic. “He said it’s important.”

Emily’s breath gushed out in relief. She checked her watch, then picked up her coffee cup, glad the detour to the ladies’ room wouldn’t make her noticeably late for the sales meeting. She’d been the Senior Vice President of Global Sales for less than a year, and she didn’t want anyone to question her ability to handle such an important position. “Carmella, you’re seeing ghosts. You of all people should know my dad likes to have meetings on his own schedule. And that he thinks everything is important.”

Carmella’s graying black hair bounced as she shook her head. “No, this is different. Jack arrived very early this morning, before you got to work. He went straight to your father’s office and waited for him to arrive, and their conversation sounded pretty intense. Jack told your father something that made him want to schedule a meeting—for all three of you—as soon as possible. Something’s up. Something Jack started, not your father.”

Emily tried not to let her alarm show on her face. “My dad was on the phone trying to close that deal with the new distributor when I walked by your desk. It could have something to do with that.” Though as Vice President of Business Development and Strategy, Jack would naturally be involved in hammering out partnerships with new distributors, both she and Carmella both knew that a contract dispute wouldn’t be something Emily would handle as part of Global Sales.

“We’ll see. I have a bad feeling.” The lines in Carmella’s forehead deepened as she spoke. “If Jack told your father that someone’s been snooping in his personnel file, there’ll be hell to pay. Your father’s determined to find you a husband, someone who cares about the company as much as you do. If he found out I interfered in that, well, he trusts me more than you could ever know, Emily. I’d die if—”

“Then I’ll take the blame.” Emily put a comforting hand on Carmella’s shoulder. In the ten years since Emily’s mother had passed away, Carmella stepped into the role of nurturer in Emily’s life as best she could. After twenty-five years as Lloyd’s secretary—first at an investment banking company and the last twelve years at Wintersoft—Carmella knew the Winters family better than anyone. By the same token, Emily knew Carmella would be devastated if Lloyd discovered his secretary had gone behind his back, even for a good reason.

“I will.” With Jack Devon in the room, how could she be anything but? 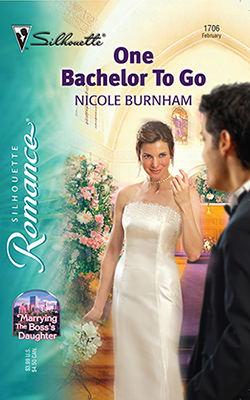