“Mi scusi. Is Prince Marco diTalora here? It’s important that I speak with him immediately.”

Amanda Hutton tried to ignore the subtle—and the not-so-subtle—stares of San Rimini’s high-rolling gamblers as she asked the manager of the elite Casino Campione the same question she’d discreetly posed at three other gaming halls in the last hour.

If she didn’t find the wayward prince and get him to the Duomo, pronto, the wedding between the tiny country’s crown prince, Antony diTalora, and her best friend, Jennifer Allen, would be delayed. Even with two hundred guests descending on the country’s famed cathedral, the ceremony could hardly start without the best man in attendance.

She fought impatience as the heavyset manager studied her with irritation in his eyes. He acted no differently than the other three managers had as he took in the sight of her formal, rose-colored gown and matching shoes. Designed for a royal wedding, it wasn’t an ordinary maid of honor’s gown, to be sure, but neither was the cut comparable to the Valentino and Chanel couture sported by San Rimini’s social elite as they made their way through the aisles of blackjack and craps tables, expensive drinks in hand.

After hearing three clipped answers of “no,” from managers at other casinos in response to her inquiries, she wasn’t about to waste time while manager number four attempted to gauge the value of her clothes and jewelry.

“Please,” she began, assuming the manager spoke English in addition to San Rimini’s Italian, “I realize there are privacy concerns, but I—”

“Your name?” He raised an overgrown eyebrow as if to say, how dare you make a demand of me?

“Amanda. Amanda Hutton. As I was about to explain, I was sent by—”

“You should know, Amanda Hutton, that when Prince Marco is a guest of this establishment, he is not to be disturbed.” He punctuated his statement with a patronizing smile, as if he fielded such inquiries from women on an hourly basis, and the name Amanda Hutton did not rate.

Even so, Amanda’s pulse upped a notch. Not only did this manager speak perfect English, the swagger in his voice said that he was hosting Prince Marco.

Before she could explain the delicate situation, he added, “Perhaps you could wait outside. With the others.” He gestured past the ringing slot machines toward a long row of glass-and-brass revolving doors leading to San Rimini’s most famous thoroughfare, the Strada il Teatro.

She followed the line of his arm. Several young women in sexy, summery dresses lingered outside. A few pulled at their hair, artfully arranging the strands over their shoulders, while others checked teeth or makeup using their phone cameras. All appeared to be waiting for a glimpse of Prince Marco. Or the chance to slip him their phone numbers.

Amanda flashed a conciliatory smile and replied, “Of course. I’m sorry to have disturbed you.”

The manager nodded his acceptance, but glowered until Amanda turned and walked toward the exit.

Scouring the main room of the posh gaming hall as she went, she spied a staircase along one wall. A tall armed guard stood off to the side. He kept his thumb hooked casually in his belt loop while he spoke with a patron, but one eye remained on the steps. Amanda figured either the casino kept its cash up those stairs or that was where the private gambling rooms were located.

She hoped it was the latter.

Under the manager’s watchful gaze, Amanda exited the casino, but kept close to the door, standing near the loitering women as if she stalked princes every day.

Unfortunately, the manager didn’t budge from his position in the center of the casino floor, leaving her little hope of getting back indoors undetected.

Amanda strode to the curb, then shielded her eyes against the bright sunshine to read the clock on the tower adjoining La Rocca di Zaffiro, San Rimini’s royal palace, which sat atop a hill less than a fifteen-minute walk to the west.

Three-thirty. With only an hour until the ceremony, there was no way she could explain the situation to the casino manager without embarrassing the royal family. 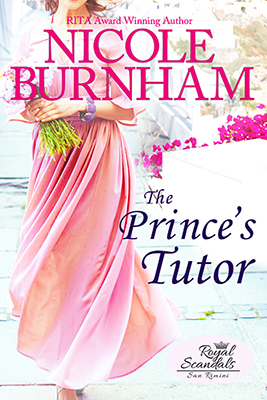