To Kiss a King

He’d gone about this all wrong.

Then again, Eduardo wasn’t sure how else he could have done it. The biggest downside of his position was the utter lack of privacy. He couldn’t exactly call the embassy and ask for the ambassador’s personal number. Not without several members of Claire’s staff—and his—finding out. Since Claire was both new to the country and a diplomat, he assumed it would be next to impossible for even his tech experts to track down her number. Nor did he have the option of grabbing a set of car keys, strolling out of the palace, and driving to the ambassador’s residence like a normal person.

Involving Miroslav—and only Miroslav—was the most discreet approach he could conceive. Even so, Eduardo had the bone deep feeling he’d made an error.

Claire looked from Eduardo to Miroslav, then her gaze swept the street once more, as if gauging whether or not this was a prank. Finally, she moved forward and slid onto the seat beside him. Once Miroslav closed the door, she turned so she faced him. “Your Highness, forgive me. I didn’t realize you were, well, here. I’d invited several staff members to the residence for a working dinner and they just left. When Miroslav rang, I thought one of them had come back.”

“Miroslav parked down the street when he saw a car about to pull away from the curb in front of your house,” he admitted. “We waited until he left and were about to take his spot when he returned.”

“Mark Rosenburg. He forgot his flatware.”

“Mine isn’t unpacked, so he brought some with him.”

He’d rehearsed a half-dozen ways to do this in the car on the way here, but words failed him now. In the confines of the rear seat, Claire became flesh and blood rather than the woman who’d occupied his thoughts for the past several days. There were details—the silver bracelet at her wrist, the light scent of her perfume, the fact she’d dressed down from her office look by removing a jacket and rolling up the sleeves of her pink blouse—that didn’t enter his mind when he daydreamed about her, and those details had him tongue-tied.

He was far more used to having others tongue-tied in his presence. He didn’t like the sensation.

Worse, Claire was looking at him in expectation while Miroslav stood outside the car with his hands resting at his hips, monitoring the street as if he thought an assassin might leap from behind one of the trees at any moment.

If any of the neighbors stepped out to walk a dog or smoke a cigarette, Miroslav would scare them to death, even though the locals knew the residence was that of the U.S. Ambassador and subject to security monitoring.

The man had a gift for intimidation.

“I assume you have a purpose for this visit, Your Highness?”

“I can’t wait to hear the cloak and dagger reason.” Her smile was wide and her voice light, but her eyes held a hint of trepidation. “I hope you aren’t here to renegotiate our deal. I have a meeting with Franco Galli on Monday. I’d hate to believe it’s for naught.”

“No. This is not in regard to our deal. Though when I told my staff about the deal at our Monday status meeting, I feared a rebellion.”

“And my press secretary. And a few others.” Sergio had called in two other political consultants when Eduardo told his senior staff what had transpired at dinner. They’d come to the conclusion that the deal wouldn’t matter, as Claire was unlikely to find support. Then his brain replayed what she’d just said. “You have a meeting with Franco Galli? Already?”

“Convincing four influential members of parliament to support a program takes time, particularly when they don’t know me. I wanted to get the ball rolling.”

“You chose wisely. I imagine that, of the four, Franco Galli will be the least difficult to convince.”

Eduardo acknowledged that with a tip of the head. “No, not easy.”

Eduardo felt his smile falter. Even when caught unaware by press questions, he never felt this off kilter. “Have you seen La Traviata?”

“No, though I noticed it on the marquee at the Royal Theater.”

“The final performance is next Saturday night. It’s a fundraiser for the Royal Foundation of San Rimini, which supports a number of charities. I attend every year. Usually Princess Isabella accompanies me, but now that she’s married, I’ve encouraged her to spend more time with her husband, rather than serving as my pity escort.”

Claire’s laugh was so sudden it seemed to surprise even her, since she quickly turned her face to the side.

“Your Highness, I can’t imagine anyone would consider themselves your ‘pity escort,’ even your daughter.”

“I’m glad you think so, because that’s the reason I came here. I’d like you to accompany me.” He gestured in Miroslav’s direction. “I didn’t intend to make it a cloak and dagger invitation, but there are a number of obstacles to communicating with you directly.”

“You want me to go to the opera with you?” 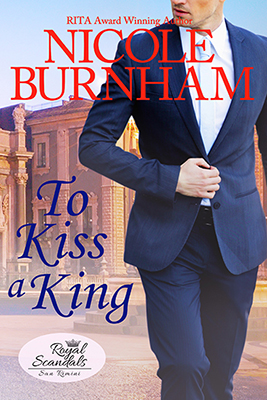