Prince Alessandro Barrali wasn’t one to consume expensive champagne in feeble sips, but with several hundred people to fool tonight, nursing his drink was a matter of necessity.

Habit brought a polite smile to his face as he stood beside the bar at his sister Sophia’s annual Christmas party and surveyed the well-to-do crowd. The usual suspects were present. Near the doorway, wealthy patrons of Sarcaccia’s national art museum gathered in a knot around British billionaire and adventurer Jack Gladwell. Many of King Carlo and Queen Fabrizia’s friends were in attendance, along with a smattering of Sarcaccian government officials and Italian socialites. But Sophia had shaken up the guest list this year, giving it a Hollywood spin by including two A-list British actors and their spouses, an American hip-hop star, three supermodels, and last year’s Oscar-winning director. Instead of the usual orchestra, a DJ spun dance music at the far end of the palace ballroom, transforming the atmosphere to that of a youthful, energetic club. Many of Sophia’s former college classmates danced under the sparkling chandeliers, one—lucky man—with an up-and-coming pop princess.

It was a setting in which Alessandro was in his element. One that allowed him to spend the night bantering with clever women and dancing with those who most interested him. After a flirtatious moonlight walk through the palace gardens or along one of the island’s glorious Mediterranean beaches, he’d take one back to her hotel for a wondrous, no-strings-attached romp.

Unfortunately, tonight he wasn’t Prince Alessandro. To all but his immediate family, he was his quiet, contemplative, identical twin brother, Prince Vittorio, the crown prince of Sarcaccia. There’d be no women, no carousing, no adventure. No fun. Certainly no second glass of champagne.

He took another paltry taste and cursed himself for creating the situation. Not that he’d have made a different choice, given the circumstances.

Vittorio’s former girlfriend, a much-loved Spanish actress named Carmella Rivas, died by suicide shortly after Vittorio ended their relationship. A private, heart-wrenching note arrived for Vittorio only hours after her death. In it, Carmella confessed the many ways she’d secretly deceived Vittorio during their relationship and apologized for her lies. She also claimed that she was pregnant. She said she’d told no one, but felt she owed Vittorio the truth after all she’d done.

Alessandro and Vittorio had been alone in Vittorio’s palace apartment when the letter arrived. In the moments Vittorio’s eyes scanned the page, Alessandro witnessed his normally stoic brother’s complete devastation. The breakup itself had been difficult for Vittorio. Enduring both the heartbreak and the scandal surrounding Carmella’s death while he remained in the public eye—and with the private knowledge she carried their child—was inhumane. Convinced Vittorio needed time alone, Alessandro suggested the switch. Vittorio refused, determined to keep Carmella’s secrets and fulfill his duties despite his emotional turmoil, but Alessandro insisted that not only could it be done, it was the best choice for Sarcaccia. He talked his brother into a two-week trial run, during which they’d attended Carmella’s funeral as each other.

It had worked. Alessandro urged his brother to leave the country and get his head on straight so he could be the crown prince Sarcaccia deserved.

Unfortunately, what Alessandro thought would be a week, maybe two, had now stretched to ten. There was no indication Vittorio would return home anytime soon.

Not that Alessandro could blame him. Vittorio didn’t trust easily and the experience with Carmella gutted him.

The crowd parted and Queen Fabrizia made her way to Alessandro’s side. With her eyes on the guests, she asked, “Are you enjoying yourself, darling?”

He answered with a sidelong glance.

“You’re too distant,” she warned quietly. “I know you had a long day preparing for your trip to Istanbul, but your brother would circulate. Make casual conversation, dance with a few of Sophia’s friends. Ask about their holiday plans.”

“Thank you. Now smile at your mother.”

He did so, then leaned down and kissed her cheek. After a final civilized sip of his champagne, he set the half-empty flute on the bar. He might be the spare, but he’d learned the lessons of the heir. Duty before all else. 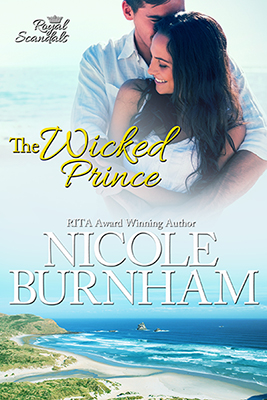