With any luck, the beauty perched on the brass and leather chair in his lobby just might lead him to Rufina.

Nick Black studied the image on the closed-circuit television behind his desk, watching as San Rimini’s Princess Isabella diTalora discreetly checked her Rolex. She kept her back straight and a smile on her face, but he suspected even modern royalty didn’t appreciate being kept waiting.

Nick grinned inwardly. Her forebear, King Bernardo, wouldn’t have exhibited such patience. The whine of an ambulance siren echoed up to him, thirty-five floors above Boston’s financial district, then faded.

He tossed back two aspirin and chased them with a cool glass of water, then turned to face Anne Jones, his administrative assistant of nearly eight years. “I’d prefer not to meet with her personally.”

“She’s a princess, not some random art collector. She will expect an explanation.”

Anne knew him well enough not to add, besides, you did agree to the appointment.

And true, he had, in a foolish moment. But if his collection manager, Roger Farris, could ferret out what the princess was after, all the better. The fewer people Nick dealt with in life—particularly high-profile people like the pampered Princess Isabella—the less his name would be spoken or his picture taken. That lengthened the amount of time he could stay in any one place, or use any one pseudonym, before people became suspicious of the fact he never seemed to age.

Modern technology would get him caught if he wasn’t careful, and that would spark an entirely different type of witch hunt than the one he currently pursued.

He gave Anne a shrug. “Roger can handle it. I suspect Her Highness wants to acquire some of my paintings or artifacts for San Rimini’s national museum. I’ve heard she’s one of their strongest supporters. If so, Roger knows I expect something in return. Preferably an exchange of pieces. Or manuscripts.” Manuscripts that could give him a clue as to what happened to Rufina and help him break his curse.

“Of course. I’ll be sure Roger gives her special attention.” Anne smoothed her gray-streaked red hair into place and ran her tongue over her teeth before ducking back into the hallway and another interaction with the famous princess.

He thanked his lucky stars—what few he had—that Anne was so efficient and that she didn’t ask a lot of questions. He would hate losing her when it came time to switch identities again.

Nick angled his black leather office chair so he once more faced the small television screen. A moment later, he watched as the princess stood and turned toward the elevator. Roger came into view, his hair neat, his posture refined, and dressed as always in a well-tailored navy suit with shoes polished to a high shine.

The lean brunette accepted his handshake, then flashed him the smile the paparazzi loved to capture on film. “I’m pleased to meet you, Mr. Black. As you know, I’ve been trying to schedule a personal meeting for some time.”

Her voice glided over Nick like a warm shower after a frigid winter’s day. He’d seen pictures and television coverage of the princess before, but never actually heard her speak. She didn’t have a trace of the San Riminian accent he’d expected. Her years at Harvard obviously helped her master American English. Still, there was a regal quality to her tone, making it obvious she was anything but an average woman.

She was the kind of woman he’d watched men die for. 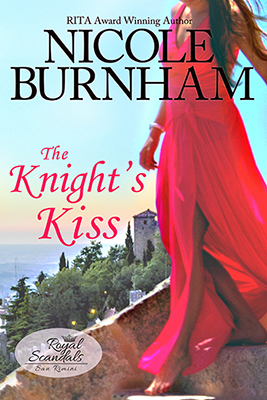