“I’ll be out in just a sec,” a feminine voice called from the back room. He could hear the rat-a-tat of a sewing machine with its foot pedal pressed, then a rustle of fabric. “That you, Amy?”

The sewing machine abruptly cut out. “Oh, sorry. I was expecting Amy Cranders for a fitting.”

He turned to see a striking blonde in her late twenties or early thirties emerge from behind the thick blue curtain that functioned as a door to the shop’s back room. She raised a can of black cherry diet soda with beads of condensation clinging to the sides. “Can I get you one?”

If the woman were splashed across a billboard holding that can, not a man would continue down the highway without at least tapping the brakes for a second look. This was definitely not the elderly woman he’d imagined running a place like this.

He angled a look at the wall clock. “Um, no thanks. If this is a bad time—”

“No, it’s fine. Amy’s not due for another half hour.” She set her drink on the shop’s narrow Formica counter, and though her mouth formed a welcoming smile, her hazel eyes betrayed her curiosity. “I’ve seen you around town a few times, but I’m not sure we’ve ever formally met.” She extended her hand, and he noticed as he took it that she didn’t wear nail polish or rings. Probably part and parcel of her profession. “I’m Katie Schmidt. You’re Stewart Porter’s older brother, right? Stewart was in my high school class.”

“Yeah, I’m Stewart’s brother.” Once again, identified by his younger brother. But when she’d mentioned school, he remembered what Stewart had said about “that Katie girl.” Or, more accurately, “that gorgeous Katie girl.”

Stewart had the gorgeous part right.

“I remember him mentioning you. You’re the one who moved to Boston for college, right? Worked in the theater?”

Her freckled cheeks flushed an attractive pink as she let go of his hand. “For a while.”

He wondered briefly what could make a person who lived in Boston want to return from that life to run a dress shop in rural Nebraska. Especially someone like her, who looked as if she could slide right into city life. He’d never had the urge to leave Bowen, but in his experience those who left didn’t come back, no matter what—or who—might be waiting for them back home.

“So what can I do for you, Jared? If you need to rent a tuxedo for an event, I’m afraid I don’t handle menswear. I can direct you to a great place in Blair, though. Mention my name and Rosalie will give you a ten percent—”

“I’m actually here for a wedding dress. That is, to pay for one.”

“You are?” Katie didn’t mask her surprise. “Well, congratulations, then. I hadn’t heard you were engaged.”
No, of course she hadn’t, since he wasn’t. Despite spending a big chunk of her life living across the country, she would know news like that would be around Bowen inside an hour. When a town’s population numbered just under three thousand, everyone knew who was single and exactly who was dating whom…or getting married. Women usually learned their boyfriends were ring shopping long before the actual proposal.

‘‘Actually, I’m not. But my daughter is. Well, she might be.” He shifted, shoving his hands into his pockets. This wasn’t going quite as planned. “If she does, I want to make sure the dress is already paid for so she won’t have to worry about it.”

“Oh, that’s wonderful! Her name’s Amanda, right?” Without waiting for confirmation, she explained, “She babysits for my mailman, and he’s told me all about her. But are you sure she’d come to The Bowen Bride? There are dozens of shops in Omaha—”

“She’ll come here. She keeps busy, and going to Omaha would take up an entire day. Plus, even if you weren’t local, your reputation alone would make her want to come here.” He tried not to let sarcasm slip into his tone as he added, “She was very excited by last week’s Gazette.” 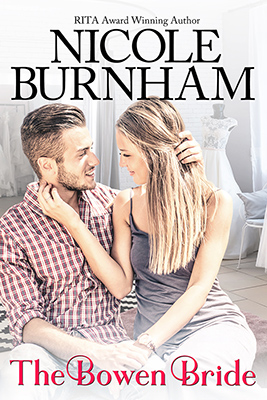