Slow Tango With a Prince

Victor stood less than three feet in front of Emily, his marked-up newspaper rolled in his hand. Despite the fact he wore the same loafers, dark jeans and white Oxford-cloth shirt as this morning, no one could doubt he belonged in an apartment as luxe as this one. He carried himself as if he already owned the place.

Taller, broader in the shoulder and narrower in the hip than she remembered from their brief encounter, when a table had served as a buffer between them, he dominated the space between the island and kitchen’s the rear wall of cabinets. He’d sent her heart into a slow flip this morning, but being this close to him fired every nerve in her body. If he spun her around and lifted her onto the counter behind him right then and there, she’d—

She met his gaze, defiant, but the chill in his blue eyes only served to emphasize the iciness of his tone. Her fantasy died, the connection they’d shared this morning completely severed by his quiet, accusing words.

“That’s why you put your business card beside my newspaper instead of handing it to me.” He stepped even closer, leaving her trapped between his formidable body and the kitchen’s massive island. “You wanted to see which ads I’d circled so you could follow me.”

Emily shook her head, hoping he couldn’t see how disconcerted he made her. She’d put the business card on the table rather than handing it to him because she’d been afraid he’d pull her fingers to his lips once again and he’d know how utterly desirable she found him. She hadn’t thought twice about the ads she’d seen marked, but how could she explain her action without admitting her intense attraction and looking like a fool?

“Then explain your presence.”

“I will, if you give me some space.” Why was he so angry?

He tossed the newspaper onto the island countertop and then surprised her by leaning forward, bracing a palm on either side of her. Her heart leapt into her throat as he spoke. “I’m not giving you anything. I want you to explain yourself. Who’s employing you?”

She blinked. Employing her? Who was this man, to have such a strong reaction to seeing her here? “I told you this morning. I’m the host of At Home Abroad.”

“And that’s why you’re following me?” His steady gaze bore into her as he spoke, as if he could draw out what was in her mind through sheer intimidation. “Or are you here for some other reason?”

It took every ounce of her fortitude to maintain eye contact. He’d imprisoned her in the space between his arms to compel her to respond, certainly, but there was something besides anger in his cold, assessing gaze, an emotion she hadn’t expected.

Astonished, she said, “I make you uneasy.”

His eyes narrowed a fraction. “I’m not afraid of anyone, let alone an oh-so-innocent-looking American woman in skinny high heels.”

“I didn’t say afraid. I said uneasy.” Which was exactly the way he made her feel. Panicky, yet attracted and fascinated at the same time. But what could possibly make him uneasy around her?

His upper lip twitched as he stared at her, the same involuntary movement she’d noticed this morning when she’d asked if his name was really Vittorio. What was it he thought she wanted? This wasn’t about appearing on her show.

“You’re trying to distract me,” he said. His rugged, handsome face was only inches from hers now, so close she could kiss him with the barest of movement, if he didn’t strangle her first for her perceived infraction. “Explain yourself or I’ll have the real estate agent throw you out. I doubt she wants to risk a sale because of you, not on a property with a commission as high as this one.”

“All right.” Emily resisted the temptation to push him away. Putting a hand on his chest to give herself room to think would only worsen her predicament. “I admit that I saw which ads you circled.”

“No, not at first.” At his look of consternation, she explained, “When I said goodbye to you this morning, I had no intention of coming here. I’d taken a chance approaching you at the restaurant. When it didn’t work out, I had every intention of sticking with the original couple we’d planned to film for the finale.”

“Then why did you inspect my newspaper?”

She couldn’t help but show her exasperation. “It wasn’t on purpose. I put it out of my head as soon as I left my card on the table.”

“Yet here you are, which leaves my mind to all sorts of imaginings.”

Was he flirting with her, or threatening her?

Both options were decidedly hazardous. 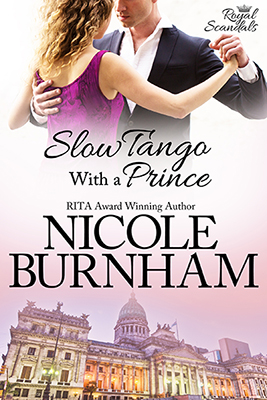