Five hours after Rocco Cornaro buried his mother, having tossed the last shovelful of dirt over her grave while wishing her a swift ascent to heaven, Satan knocked at his front door.

Rocco stood at a second story window in his Dubrovnik villa, seething at the gall of the woman hidden behind the tinted windows of the rented black Mercedes. The uniformed driver hadn’t given his client’s name, but Rocco knew. Her appearance was inevitable after she’d phoned two days ago and he’d hung up after informing her that he had no interest in anything she had to say. He’d thought she’d at least give him the day of his mother’s funeral in peace, but apparently royals did what they wanted when they wanted, and to hell with anyone else.

Rocco took a seat in his late stepfather’s favorite worn leather chair, kicked his feet onto the windowsill, and dragged his palms over his face. Keeping it together while delivering his mother’s graveside eulogy was the toughest thing he’d done in his life. Despite the emotion that threatened to overwhelm him, he’d made it through, his voice resolute as he addressed the small gathering of friends and family. He finished a heartbeat before spying his wife watching from the shadows of a tree near the edge of the cemetery. There was no mistaking Justine’s stature, still lean and tight as any Olympic athlete, nor the fact she recoiled as he glanced in her direction. He hadn’t invited her, and she hadn’t intended to be seen.

What was it with women showing up where they weren’t wanted today?

Thank God his siblings hadn’t noticed Justine standing alongside the trunk of the thick oak. Double thanks that they hadn’t accompanied him back to his residence to see the sleek Mercedes now parked outside. It would’ve spurred even more questions than his wife’s appearance.

Rocco leaned forward in his chair to take another look outside. The driver spoke near the Mercedes’ cracked rear window, nodded, then returned to the gate and folded his hands in front of him in a show of resolve. On the roadway behind the Mercedes, a red BMW belonging to Rocco’s uphill neighbor slowed as it passed on its way to the heart of the city.

“Sir?” Kos Horvat stood in the doorway of Rocco’s study. Twice Kos had informed the driver that Rocco was not available. Twice the driver had insisted that Rocco would wish an audience with his passenger and that they would wait.

Rocco swirled the amber liquid inside the crystal tumbler he clutched in one hand, then took a long, slow sip, savoring the burn as it made its way down the back of his throat. If anyone could be deterred from darkening Rocco’s entrance, Kos was the man to deter them. Not only did he manage Rocco’s properties, he had extensive security expertise and a build as powerful and unyielding as Dubrovnik’s ancient city walls. But Queen Fabrizia, whose husband ruled the wealthy Mediterranean island nation of Sarcaccia, apparently wasn’t one to be put off by a burly, sour-faced Croatian with a voice rough enough to intimidate men twice her size. Nor was she one whose mood would improve with the delay.

“Talking to myself, Kos.” Rocco rose from the chair and turned away from the window. “Allow the visitor to enter, but the car and driver stay outside the gates. If this person is so anxious to see me, they can walk.”

The corner of Kos’s mouth twitched. It was as close to a smile as the big man ever revealed. “Of course.”

“Then go home. You’ve been here around the clock for the last two weeks and worked overtime before that.” During those long days, while Rocco’s mother had been ensconced in the guest room waiting for the end to come, Kos had been a godsend. “You’re due a vacation.”

“And I don’t need you for the next few weeks. It’s April now. The weather should be beautiful. Go while you’re able.”

Kos regarded him for a moment, then gave a slight nod. “I’ll leave once your guest has departed.”

“No need to wait. I’ll gladly provide a personal escort from the premises when we’re finished.” Then he could sink into the solitude he desperately craved. He could mourn. He could rattle about the villa with no witnesses, no looks of concern, and none of Kos’s silent watchfulness.

“When shall I resume my services?”

“Take two weeks. No…take three. Your wife deserves a vacation as much as you do. She’s been incredibly patient while you’ve been here.”

“As you wish.” Gratitude flared in the Croat’s eyes. “Again, sir, my condolences. Your mother was a great woman.”

As Kos’s steps faded, Rocco spun away from the door and set his half-empty tumbler atop the wide mantel that crowned the room’s stone fireplace. His mother always described Queen Fabrizia as a worthy opponent. Better he wait to finish his liquor until the woman departed.

With any luck, it’d be his first and last confrontation with her, and it wouldn’t take long. 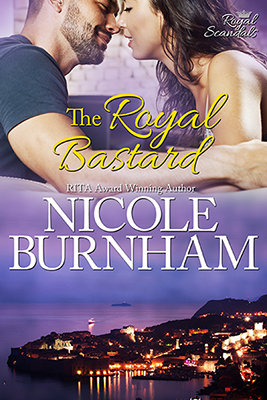