Honeymoon With a Prince

Kelly Chase woke with a start, nearly knocking over her daiquiri as she flung her hand to the right, in the direction from which she could’ve sworn she’d heard the low whunk of design books slamming into the floor.

She blinked when the sounds of rolling surf and distant laughter reminded her she was nowhere near the office. While her heartbeat slowed to its normal rhythm, she cursed herself for trying to ruin a perfectly good honeymoon by dreaming about work.

Then again, her friends accused her of ruining a perfectly good honeymoon by opting to take it without the groom.

Having barely rescued the daiquiri, Kelly pushed herself to a seated position, righted her sunglasses, and took a long, fortifying sip of the sweet pink drink. Before her, a cerulean sea spread out as far as the eye could see, its surface glittering in the late afternoon sunshine. Small boats bobbed along on the waves, some carrying fishermen back to shore after a day of work, while others served as floating escapes for those who wished to relax away the summer undisturbed.

Satisfied that all was as it should be, Kelly stretched back on her lounger and closed her eyes. Rays from the sun seemed to warm her from the inside out, lifting her mood, making her feel unencumbered and free.

No matter what friends and family said, this trip was absolutely the right decision.

Since her presumed groom was a first-class jerk, boarding the plane alone yesterday for the overnight flight to Europe seemed the perfectly logical thing to do and not ruinous at all. She’d wanted to visit the idyllic Mediterranean island of Sarcaccia since she’d first heard of the place. Even if none of her friends could accompany her on short notice—either that or they didn’t want to, given that she’d dumped her fiancé ten days before the wedding—she wasn’t about to let the airline ticket and rented villa go to waste.

Besides, not only had she paid all the deposits for the trip out of her own hard-earned cash, she’d put in countless pushups, crunches, and treadmill miles while living on salad, egg whites, and veggies over the last three months, all so she’d look good in her wedding photos and the pricey bikini she now sported. She wasn’t about to let that go to waste.

The breeze picked up, ruffling Kelly’s hair and cooling her skin just enough to make her drowsy again. She’d earned this nap, in this chair, on this beach, even if she did end up dreaming about work. And frankly, dreaming about work wouldn’t be so bad—she’d never been afraid of hard work, since it gave her life a purpose—if she hadn’t sold her business for the presumed groom.

The thought of oh-so-perfect Ted Robards and all his promises made her mutter aloud, “Arrogant jackass.”

The unexpected sound was so deep and close to her ear that Kelly launched from her chair, carried by the warm blast of dog breath that signaled a sizable beast. This time, she did knock over the daiquiri.

Her heart threatened to pound out of her chest as her feet hit the sand and she whirled to look behind her. A dog the color of rich, dark chocolate and with roughly the size and build of a German Shepherd sat at the head of her chair. A dark tongue hung from between pointed teeth, bouncing up and down as he panted.

“Hello,” she addressed the creature, who seemed perfectly harmless aside from his massive build. His strong shoulders and lean frame didn’t budge as she stared at him. It was as if he’d been trained to sit in that particular spot until commanded to do otherwise. “You surprised me. Would your bark happen to sound like a thick stack of books hitting the floor?”

The dog cocked his head as if he understood. He was gorgeous, all restrained muscle and shiny fur. Though she’d grown up with dogs and loved them to pieces, she’d never seen one quite like this. His eyes were a surprising blue and his nose long and lean, ending in a wet black snout. When she put a hand on the arm of her lounger, allowing the big boy to come close and sniff, then nuzzle, she discovered his short coat was soft as the fuzz on a newborn kitten.

“My goodness, but you’re beautiful.” Once he seemed comfortable enough with her, she scratched his triangular ears, which stood at attention, then moved her hand down his neck to feel for a collar. Nothing. Despite the lack of identification, the dog seemed well-loved. His weight was healthy, his eyes clear, and his coat neat, especially given that he was at the beach. She scanned the chairs nearby. Most were unoccupied, since the majority of beachgoers who’d arrived early in the morning to claim their spots had now left for the day. Of the few that remained, none appeared be searching for a dog.

“You’re welcome to stay here if you like,” she said as she cautiously resumed her seat in the lounger. Hoping he knew a few basic commands, she urged him to lie down beside her. He stepped forward, so he was at her hip, then sat once more and cocked his head, as if waiting for instruction.

Testing one of the hand gestures she’d used for her own pets when she was a kid, she urged, “Down.”

No dice. She tried a few different gestures. Different commands. Still no luck.

“Oh, come on. The least you can do is lie down like a good boy after causing me to lose a very expensive drink. Bar service on this beach is infrequent and not at all reasonably priced.”

He scooted closer, then rested his head on her thigh. His gaze shifted to meet Kelly’s in a not-so-subtle hint.

“You” —she rubbed circles behind the dog’s ears— “sure know how to kiss up. Do you do this with your owner, too? I bet you do.”

The dog let out a low, happy whine of satisfaction, then promptly turned around and stuck his butt in her lap.

“You’ve gotta be kidding me,” she murmured, but since the dog seemed hungry for attention—or a good scratch—she obliged. “You’d better not have picked up any fleas in this sand.”

As the dog shifted to get closer to Kelly, she discovered he was wet under the uppermost layer of his coat, close to the skin. She glanced toward the water, wondering if that’s where his owner might be. A white boat, about the right size to carry four to six people out for a day of fishing, approached the local marina about a hundred yards down the beach from her. From this vantage point, Kelly couldn’t tell how many people might be on board or if they were looking for a dog, but she didn’t pick up any unusual vibes. Another two men stood at the walk-up bar where the dock met the beach, but given that they’d passed her a few times earlier that afternoon carrying beer bottles and large bowls of appetizers with no sign of a dog at their heels, she doubted the big boy was theirs. Behind the bar, a walkway leading to a set of six boat slips stood empty. Five boats were docked and covered for the day. She assumed the vacant slot belonged to the white boat.

She glanced in the other direction, toward the parking lot and the cliffs that framed the beach, but nothing indicated the dog had come from there, either.

The dog let out another low moan and shoved its rump harder against Kelly’s hand.

“You’re incorrigible,” she complained, though she continued to give the dog attention. After a few minutes, he let out a deep, throaty groan, then flopped in the sand beside her, turning so his head rested on the lounge chair near her hip. Though his body went lax, his eyes remained open, scanning the area as if watching over her.

Soon someone would miss this dog. Wouldn’t they?

Keeping one hand tucked into his short fur, she leaned back in the lounger and waited. Soon the sun would dip low enough to cool the air and chase the last of the beachgoers home. If she couldn’t find the owner by then, she supposed she’d need to call the local police. There had to be some type of animal control organization on the island. Hopefully they’d find the owner and not send the boy to the pound.

She couldn’t bear that thought.

“You’re fine with me,” she whispered. It felt reassuring having a dog to keep her company after all the upheaval of the last few weeks. He likely needed love, just as she had. She most certainly wasn’t going to let down this sweet dog the way Ted—the liar—had done to her.

As if he understood, the dog pushed himself out of the sand and climbed into the lounger beside her, shoving Kelly to the very edge as he squeezed against her with an oomph.

Kelly laughed, but allowed him to take over the space. “I bet your owner doesn’t let you do this on the sofa at home, huh, boy?”

He let out a whiny grumble in response, then plunked his head on her shoulder.

It wasn’t her idea of a honeymoon cuddle, but she had to admit it was infinitely better than sharing her chair with Ted.

With any luck, she’d never see him again. 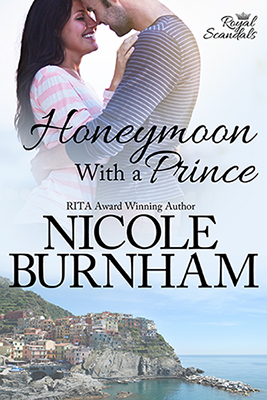