“I’m never going to be able to tell a placenta previa from a placenta accreta.”

Pia Renati reminded herself to keep her grumbling under her breath, then leaned one shoulder against the backlit cologne ad adorning the wall of the San Rimini International Airport and flipped to the next page of a thick, floral-jacketed pregnancy guide. How in the world did women have babies without a medical degree?

And why in the world had she gotten the call when her friend Jennifer Allen—now Jennifer diTalora—needed someone to come stay with her during her obstetrician-imposed bed rest?

Pia’s friends always looked to her in a disaster. As Pia’s former boss at the refugee camp where they’d worked a little over two years ago, Jennifer knew that better than anyone. Setting up food banks came as naturally to Pia as walking. Helping to build temporary housing under a hot African sun? Establishing databases to reunite those fleeing conflict with their loved ones? Been there, done that. As a relief worker, Pia didn’t fear hard work, and she’d been around more than one field hospital. But caring for a pregnant woman due to deliver the newest heir to San Rimini’s throne at any time? What Pia knew about pregnancy and kids she’d learned in the last hour.

Her own mother hadn’t exactly emulated the warm and loving maternal types that were standard issue on television sitcoms. Even most cartoon mothers would have been an improvement over the perpetually-absent Sabrina Renati. But Jennifer insisted she wanted Pia by her side, and Pia wasn’t about to say no to a pregnant friend who happened to be married to the crown prince of Pia’s home country.

Pia skipped to the next section of the pregnancy guide that Jennifer had sent her, nearly dropping it on the floor of the crowded airport terminal when faced with a full-page black-and-white photo of a woman giving birth. She’d assumed the book would leave certain moments to the imagination.

Well, she supposed, the shot could have been in color.

Pia barely heard the smooth baritone behind her, since at that exact moment the airport’s public announcement system loudly requested a passenger report to security for a lost item.

Instead, a sudden sense of foreboding made Pia snap the book shut. The hum of conversation around her ceased and every single set of eyes on the concourse focused on the man behind her.

Without turning around, Pia realized who had to own the distinctive, opera-caliber voice. It wasn’t a palace driver as she’d expected, coming to show her the way to his Volkswagen minivan, but quite arguably the world’s most desired single male, the recently widowed Prince Federico Constantin diTalora. The man known by tabloid readers everywhere as Prince Perfect for his Mediterranean good looks, unimpeachable reputation, and his devotion to duty.

Of course. The one time she didn’t get the chance to grab a breath mint or fix her makeup before getting off an overnight flight.

Hoping he hadn’t been surveying her reading material over her shoulder, Pia forced herself to smile as she turned to face Jennifer’s brother-in-law, the man second in line to the thousand-year-old throne of San Rimini.

Judging from the expression on his oft-photographed face, the prince had gotten a good look at the photo in the book.

It had been years since she’d been home and able to speak her native San Riminian-accented Italian, and Pia had been anxious to chat with someone who understood her heritage. Someone who could discuss San Riminian politics, give her the latest gossip about local celebrities, maybe update her on the newest restaurants and hole-in-the-wall dance clubs.

But the sight of the famous royal—a well-toned man who filled out his understated black suit and crisp white shirt as well as any action star walking the red carpet at the Academy Awards—took her aback, and she only managed to get out a feeble, “Prince Federico. Buon giorno. Come sta?”

What in the world was he doing here? Jennifer never mentioned sending Federico to the airport. The prince not only towered over Pia, he possessed that intangible quality that every man coveted—charisma. They’d been introduced during Jennifer’s wedding to Crown Prince Antony two years earlier, and Pia had been so nervous she’d said the required niceties and quickly retreated to the reception table where her co-workers from the Haffali refugee camp were seated, overwhelmed by the brief encounter.

Federico and his elegant wife, Lucrezia, were polite enough, but both seemed above the festive, romantic atmosphere of the wedding reception. Lucrezia had been everything Pia wasn’t—tall, rail-thin, and golden, with dark, straight hair, full red lips and a sense of style worthy of catwalks. The type of woman every fashion editor clamored to have featured in their magazines.

And Federico? Well, his mere presence had intimidated the hell out of her. His quiet, composed demeanor, combined with his polished shoes, custom tuxedo, and royal sash had stolen her breath that night.

And then there were those amazing cheekbones. The strong, smooth jaw that never showed a hint of five o’clock shadow. The rich olive skin she imagined felt like heaven under a woman’s fingertips.

Pia clasped the pregnancy book against her sage green cotton T-shirt and wished she’d thought to dress a notch above khaki pants and sandals. At least the last time she’d met Federico, she’d been wearing a designer gown and heels.

The prince made a subtle gesture with his right hand, and a lean man standing nearby rushed forward to pick up the bag at Pia’s feet. “I am quite well, thank you. However, if you do not mind, I would prefer to converse in English. I am attempting to improve my skills, and do not often have the chance to practice with someone who speaks both our language and English so well. You have spent a great deal of time in the United States, yes?”

She held back a sigh. “I have, and English is fine.”

While she would have preferred Italian for casual conversation, hearing the prince call her signorina made her feel like a kid, and less mature than her thirty-two years. It was a term used in San Rimini by her grandparents’ generation. Besides, it wasn’t as if the prince was the casual conversation type, anyway. 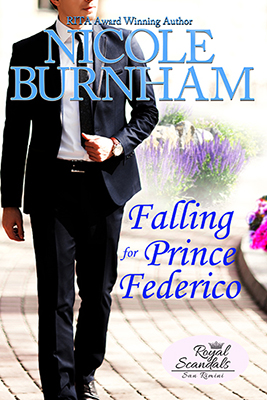