Christmas With a Palace Thief

Breaking into a royal palace wasn’t an easy task, even for the most skilled thief. When that palace teemed with holiday guests, many of whom were VIPs, tightened security protocols made the challenge even more daunting.

Sara Angeletti was not a skilled thief. Fortunately, she had other key factors working in her favor: familiarity with the building’s layout, inside information on the royal family’s surveillance system, and a dreary, moonless night. Best of all, tonight’s mission was for a purpose near and dear to her heart.

The black umbrella clutched in Sara’s gloved hand shielded her from the cold drizzle as she made her way along Via Floriana, the city boulevard that bordered the rear of the palace complex. It also shielded her face from the security cameras and passersby, for despite the late hour, Sara wasn’t the only pedestrian on the wide sidewalk of Sarcaccia’s capital city of Cateri this Friday night. A smattering of businesspeople and civil servants strode past her purposefully, their heads down and shoulders hunched as they attempted to escape the rain before it soaked through their clothing. The rest were holiday shoppers, their arms loaded with bags as they hurried toward one of the neighborhood’s bustling restaurants or dashed for the shelter of the nearby bus stop awning to await a ride home. The few pedestrians who dared raise their eyes were interested only in the glitter of the Christmas lights strung over the street or the route numbers displayed on the front of the approaching busses.

Even for this time of year, it was rare weather for the Mediterranean island, given its sun-drenched location only a ferry ride from Naples, Italy. Sara couldn’t have planned it better.

Two buses lumbered to a stop, one behind the other, sparking a frenzy of activity as people queued to board. A few passengers used their arms or elbows to wipe condensation from the windows in an attempt to read the street name over the bus stop and get their bearings. Sara took advantage of the distraction to cover the last few steps to her destination: a spot along the low stone wall she knew was difficult to see on the palace security feed. She checked to ensure no one was paying attention to her, then folded her umbrella and slipped it between the wrought iron rails of the fence that topped the wall. She took care to keep her head down and face aimed away from the cameras as she waited to confirm that the motion detectors had been disabled.

After another quick glance to confirm she wasn’t being watched, she stepped onto the stone, grabbed the fence’s top rail, and propelled herself up and over to land in the narrow space between the wall and a row of tall, neatly-trimmed evergreens. From the time Sara stepped onto the stone wall until she landed on the softly packed earth, only four seconds had elapsed. She’d timed herself enough times while practicing on a similar fence near her apartment to know.

In one smooth move, she dropped to her belly, grabbed the umbrella, then wriggled under the evergreens. Low, sharp branches scratched her back, but she’d worn a form-fitting jacket and tucked her shoulder-length dark hair into a tight cap to prevent snags. She couldn’t risk making a racket by disentangling herself from the bushes while she could still be seen by those on the street.

A few seconds later, she emerged into the royal family’s private garden. She rose to her feet, brushed the damp dirt from the front of her jacket, and allowed herself a moment to catch her breath and savor her success. Sarcaccians were fiercely loyal and protective of the royal family. They wouldn’t have stood idly by if they’d spotted her scaling the fence. If the cameras had caught her movement, the sidewalk on the other side of the evergreens would’ve been instantly illuminated. Yet all remained dark and still, and the only sounds coming from the opposite side of the evergreens were typical city noises. The honking of taxis, the low hum of car engines, and occasional voices from the bus stop.

Sara waited for the thrumming of her heart to slow before she bent to hide the umbrella under the evergreens. She took care to note exactly where she left it. Unlike the palace’s famed formal gardens, which boasted wide gravel walkways, crisp hedges, and smartly-labeled flowerbeds, this enclosed, private space was a riot of blooms during the spring and summer months. No paths existed save the seemingly random patches of moss and grass that allowed one to walk amongst the flowers and take cuttings of whatever appealed. With the onset of winter, most of the perennials were trimmed down for the season and the fountain in the garden’s center emptied of water and silent. She gauged the distance from the fountain to her current position. With no lights or paths to guide her, it’d be easy to lose the umbrella, and she needed it on her exit to avoid being identified on camera.

Though if everything went according to plan, the security staff would never know she’d been here, and they’d never have cause to review the video footage. That was crucial; even if she’d successfully obscured her face, the footage would make it obvious she’d had inside help. All would be for naught if it were traced to the king himself. 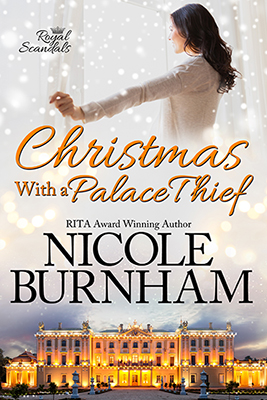