Christmas on the Royal Yacht

Rock angled his head and shot a look at his now-curious assistant, Andreas, urging the young German to continue on to the working galley with the tray of pastry. Once Andreas disappeared, Rock set the case of champagne on the marble countertop and plastered a nonchalant smile on his face. His heart thudded against the wall of his chest as he gave April a casual once-over, and it wasn’t due to the effort of carrying the heavy load. “I had a feeling you’d show up someday to fix my creaky parts.”

“I’m not here to fix your creaky parts. I’m here for routine maintenance.”

“I could use that, too.” Though from April, it’d be anything but routine. She’d been sexual crack cocaine to him. He’d have done anything, given up anything to spend another night, even another hour, in her bed. But just when he was sure she needed him most, when he’d felt the most connected to her, she’d left him, opting to take a job here in Sarcaccia that she’d turned down twice before. And she’d done it with nothing more than an it’s-been-great and a quick kiss goodbye. Her abrupt departure left him reeling.

Hell, seeing her in the flesh left him reeling, despite the fact he’d been told she was coming aboard and mentally steeled himself for a face-to-face. He’d be damned if he’d let her see it, though.

The woman looked even better than when he’d last seen her five years ago, despite the fine mist clinging to her face and the lower part of her pants. Her cheeks were flushed from the chilly weather and her gray-blue eyes were as lively as ever. Her blond hair curled at the ends, just below her shoulders. When he’d last seen her, it’d been cropped around her ears, almost like a boy’s, though no one would mistake April’s feminine physique for that of a male.

He’d forgotten just how gloriously she filled out a top. The cantaloupe-colored, long-sleeved fitted T-shirt she wore hugged her in all the right places.

He arched an eyebrow at her. “That’s not what you said last time we—”

“Uncle!” She held up a hand and glanced around, as if afraid other crew members would walk in on them. “Uncle. You win.”

“Didn’t know there was a competition.” But he had known that aggressive flirtation would convince April to keep herself at arm’s length, which was what he needed for the duration of her time on board.

She leaned one curvaceous hip against the kitchen island. “Can we start over? How about, ‘It’s good to see you, April. I hope you’re doing well.’ Will that work?”

One side of her mouth cocked into a smile and she glanced at the case of champagne before turning her blue-eyed gaze back to his face. “You’re really the chef here?”

“Are you questioning my skills or asking how I ended up in Sarcaccia?”

He ached to make yet another sexual innuendo, but settled for, “I came here the same way you did.”

April didn’t bother to hide her skepticism as she set her toolbox on the floor. Before she could ask the question he saw in her eyes, Rock explained, “Queen Fabrizia was in New York at my Greenwich Village restaurant a few years ago and asked to meet the chef. We had a nice conversation and she complimented me on the meal. Last spring she and King Carlo were in the States on a diplomatic visit and arranged to have a private dinner. Afterward, they asked if I would consider working for them.”

Her eyes widened. “You expect me to believe you gave up two restaurants for what, a boat?”

I didn’t give ’em up to follow you, sweetheart. 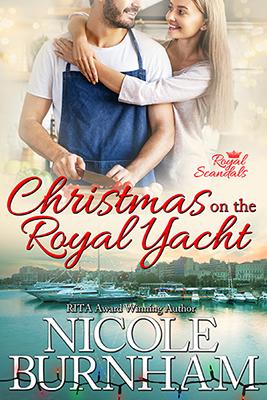