Behind the Scenes: Queen Elizabeth II

The passing of Queen Elizabeth II last week marked the end of an era. She bore witness to massive change throughout her lifetime. In the coming years, historians will have much to analyze about her impact on the United Kingdom and on the world. Today, the transition dominates the news cycle. It’s a time where even those who pay little attention to the monarchy are bound to consider it as broadcasters and royalty experts reel off statistics about her reign and the ceremonies honoring her life. (The flight carrying her coffin from Edinburgh to London is the now the most-tracked flight in history.)

It’s no wonder I’ve received emails this week asking how such ceremonies might be reflected in upcoming Royal Scandals novels.

The answer: Sarcaccia is not the United Kingdom. It has its own history, traditions, and personalities. It’s also fictional.

However, for a reader to travel wholeheartedly alongside the individuals who inhabit Sarcaccia, to share their joys and sorrows and their journeys to a romantic happily ever after, Sarcaccia must feel real.

In a romance novel, that means ensuring that the characters’ emotions feel real.

I spent a good chunk of this morning watching BBC coverage of the royal procession from Buckingham to Westminster. Queen Elizabeth’s coffin rode atop a gun carriage and her family members walked behind. Rather than focus on the logistics, I watched the people.

At one point, the camera zeroed in on the statue of the late Queen Mother, noting that Elizabeth unveiled the statue in 2009. The camera then focused on King Charles. His eyes cut to the side—just for a moment as they passed the statue—then he blinked and turned his attention forward. His head never moved, only his eyes. The camera shifted to Princess Anne’s expression, before moved to a wider shot of Prince Andrew, Prince Harry, Prince William, and Princess Anne’s son Peter Phillips. To mark each interval of the procession, a single toll echoed from Big Ben followed by the fire of minute guns. After one boom, Prince William’s gaze flicked to the side of the road, where thousands and thousands of people gathered to honor his grandmother. For just a moment, one side of his mouth lifted—perhaps in hope, perhaps in gratitude—as he took in the sight.

It’s not the pomp and circumstance itself I want to capture when writing about Sarcaccia, but the human emotion of those larger-than-life moments. There’s a juxtaposition of the personal and public that affects each person present in a different way, whether it’s a member of the royal guard marching in front of the casket, a police officer standing to the side of the street, a citizen who stood alongside the street for hours to pay their respects to the late monarch, or the family walking steps behind the casket. Then there are those who aren’t present—people who worked in the Queen’s home and spent years interacting with the monarch on a personal level—but have jobs that require their attention and preclude attendance at the day’s events.

In Sarcaccia, it might be as lighthearted as when Kelly admits to April during an Independence Day celebration that she never understood the allure of parades, especially given the level or organization required (Honeymoon With a Prince.) But it’s also apparent in the complex feelings that arise when Prince Vittorio attends the public funeral of his ex-girlfriend, a beloved Spanish actress (Slow Tango With a Prince.)

When I sit down to write, I keep the deep feelings behind royal events in mind. Those emotions—love, grief, duty, and hope—are universal. They’re apparent in the faces of those in attendance at the ceremonies surrounding Queen Elizabeth’s passing. They’re apparent in the voices of the news pundits who cover the events, and in the words of those who’ve stood at the side of the road outside Windsor Castle for hours to show their support for her family. Those universal emotions are also what enable us to pick up a work of fiction, believe in the characters, and—when those characters face the darkest of days or when they experience the joys of finding love—think, yes, I get it as we fly through chapter after chapter, long into the night. Then, in the end, close the book knowing the journey has come full circle. 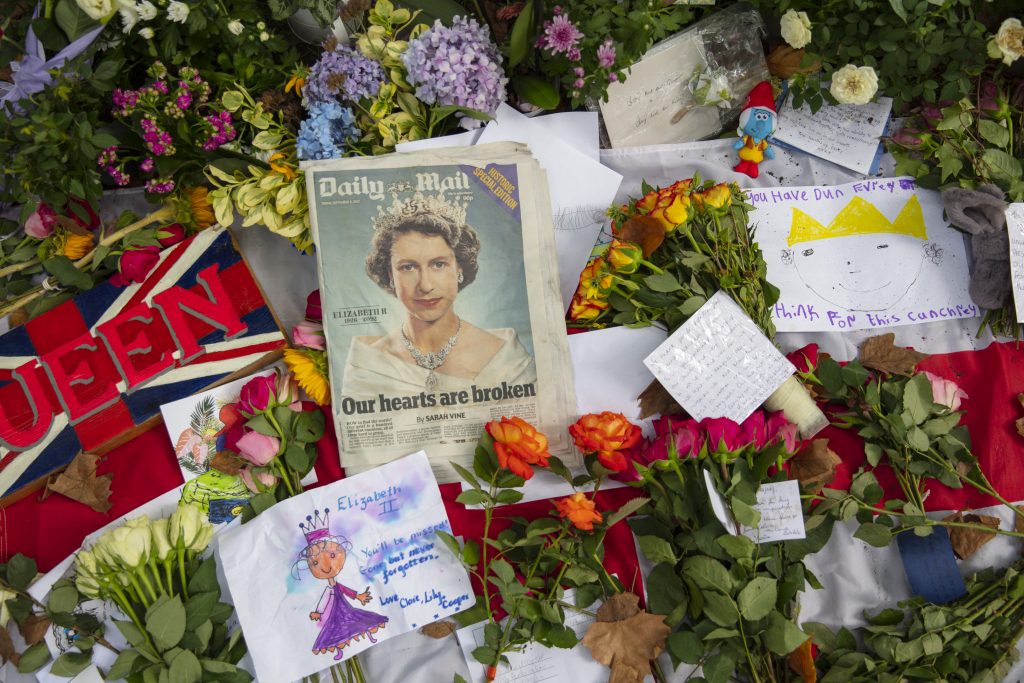 LONDON, UK – September 2022: Thousands of flowers, cards and messages are laid in Green Park in tribute to Queen Elizabeth II after her death.